Nothing worthwhile comes easily. After dedicating the past five years of my life to steady, focused work; I now have my own thatched roof hut on a fenced acre of fertile land, two puppies, a garden, and what’s beginning to look a lot more like a farm here in Belize. It hasn’t been easy, but it certainly has been worthwhile. I’ve discovered the happiness of homesteading. 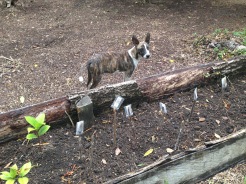 Recently, I’ve delighted in the happiness of homesteading alongside my happy homesteading partner who happens to have been born and raised here in Punta Gorda, Belize, a tiny town where fishing and farming are still how most people make their living.

The indigenous Garifuna, known for their rhythmic drumming and lively dancing, are skilled fishermen and farmers, as these traditions have been passed down through the generations. “My father used to go out and fish all day,” he told me one night as we shared a pot of fresh caught fish that he’d brought me from the Caribbean Sea, just a ten-minute walk down the dirt road from my house. “My father used to catch so much fish, he would hand out fish to everybody.”

When I first arrived over five years ago in Belize, I spent the first two years volunteering on friends’ farms before I decided to start my own. I learned about Belizean culture and made friends with many local people, including the Garifuna. While visiting a friend, I saw a framed picture hanging on his wall of a black Jesus surrounded by black disciples with dreadlocks flowing down to their waists. I stared at the photo and re-evaluated my white Anglo-Saxon upbringing and the photos of Jesus I had seen in church: you know, the ones that make Jesus look like a blue-eyed surfer boy. As I stared at the picture of the black Jesus, I knew in my heart that Jesus must have been a black man, and his disciples probably were, too. 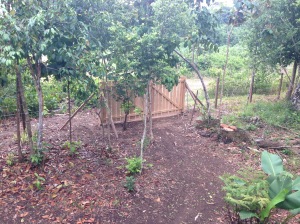 When I first met the Garifuna people of Belize, I was overcome by their beauty, grace, strength, simplicity, and depth of spirit. I decided that Jesus must have been Garifuna. I didn’t know that years later, I would meet my beautiful Garifuna partner at the local ice cream shop, of all places, fulfilling my wildest dreams of making a happy homestead here in Belize. One year after the completion of my thatched roof hut, I’ve planted my roots and essentially kissed my former life in the US goodbye, as returning to the States presents more obstacles than benefits to my happy homesteading life, as it is now.

I am home. Here in Belize, I have my hands—and my heart—full. I live simply and enjoy the bounty of a good harvest every day, in the midst of the most skilled fishermen and farmers on the planet. It has been a lot more enjoyable to share the joy with a homesteading partner, especially considering that he is the son of a fisherman and grandson of an herbal medicine wisdom keeper of the indigenous Garifuna culture. This morning he served me a steaming cup of freshly brewed jackass bitters, the leaf from a tree that grows on his ancestral farm. “My grandfather used to drink jackass bitters every day,” he said, “It will fight off any infection in your body.” I’ve found this to be true: At the first sign of the sniffles or a sore throat, a cup of jackass bitters usually nips it in the bud.

Last week, with the help of my favorite building contractor (the esteemed Mr. Jose Bo, a Mayan man from the neighboring village), we surrounded my acre property with a barbed wire fence and over one-hundred sapodilla posts. Sapodilla is a hardwood tree harvested locally that will allegedly last over fifteen years without succumbing to the elements, which here include termites, heavy rainfall and tropical humidity.

During the entire first year of living in my thatched roof hut, I lavished myself with plenty of leisure time to get used to being a homeowner. I spent an inordinate amount of time relaxing in my hammock, dreaming of all the awesome projects that I would one day accomplish. I made detailed, ambitious lists and stared longingly at them while lying in my hammock. One year later, I am now sufficiently motivated and courageous enough to put on my work boots, don my straw hat, and grab a shovel. I drop an inordinate amount of sweat under the hot Belizean sun in so doing, but like I said, nothing worthwhile is easy. I can always look forward to the coolness of evening, when my partner and I cook dinner with herbs and vegetables from our farm, light the kerosene lantern and gaze at the millions of stars visible in our unprecedented starlit sky. 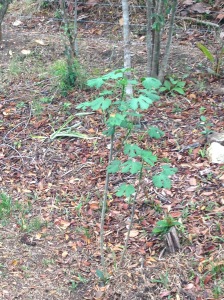 Chaya, a highly nutritious, leafy green that is similar to spinach when steamed

There’s nothing like the feeling of eating a home cooked meal with vegetables from your own garden. Nothing. It’s the kind of satisfaction that can only be understood by someone who has had the same kind of experience, which is why I’ve learned to share homesteading success stories with other happy homesteaders who can relate to my hard-earned payoff.

I was most proud of my successful installation of door handles to my wooden door, which I’d grown tired of awkwardly grasping around the frame. I realized that I could only install the handle after purchasing a Phillips head screwdriver, the first one I’ve bought specifically for the purpose of making home improvements. As I happily wielded my new screwdriver and door handle, I smiled at the thought that only a strong, determined woman could move across two borders, build herself a house, and cultivate a happy homesteading partnership here in Belize. Only someone like me could handle what it takes. Our two puppies agree.

Visit us at The Farm School